This satisfying Meat and Potatoes Casserole features ground beef or turkey sauteed with vegetables, covered in potatoes, and smothered in a light, creamy sauce. Bake it up tonight for a dinner your family will love! 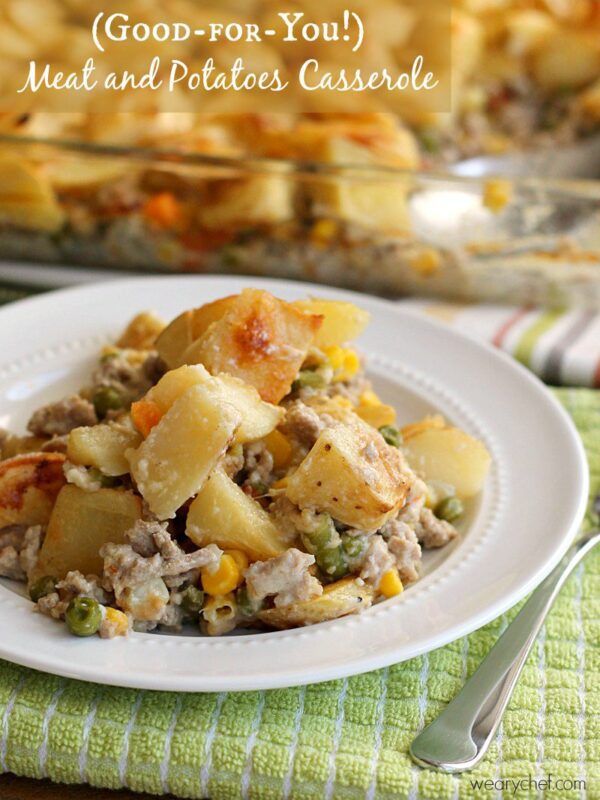 Do you like shepherd’s pie? I’ve only had it a couple times, and I wasn’t impressed. I’m sure it could be good if the mashed potatoes on top were done well, but the versions I’ve had were topped with bland potatoes, which kind of ruined the experience for me. I don’t think I’m a mashed potato snob, but maybe I am. If they aren’t smothered in gravy, I think they need to be pretty flavorful on their own. 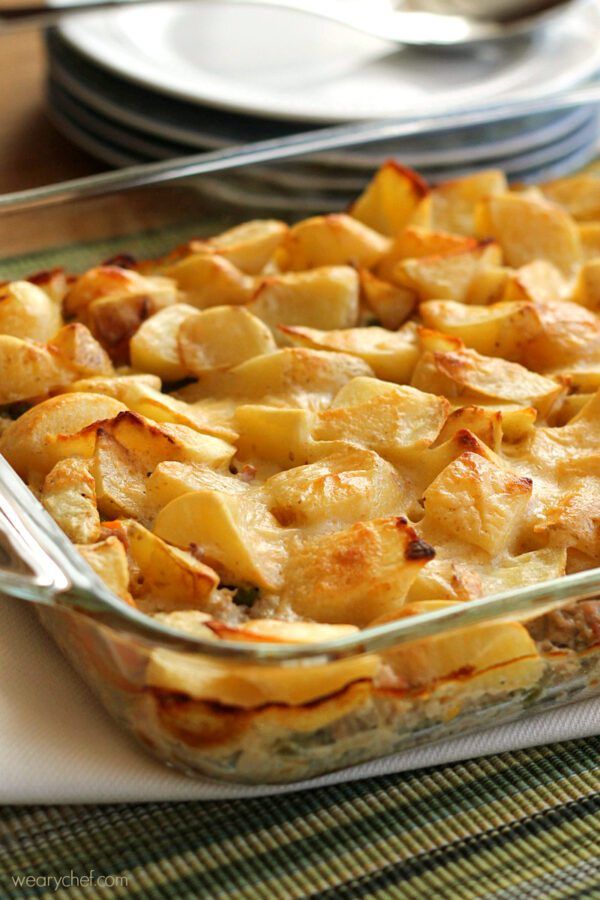 This hearty but healthy casserole was inspired by shepherd’s pie, but I wanted to change up the topping a bit to add more flavor and texture. I topped it with frozen potatoes, which browned nicely and created a chewy instead of mushy topping. The casserole is smothered in a creamy sauce, but it’s made with only one tablespoon of butter so is actually pretty light. You could make this with ground beef if you prefer. I actually made it twice this week because I wanted to improve the recipe a bit after the first time. I used beef first, but I liked the turkey version better. 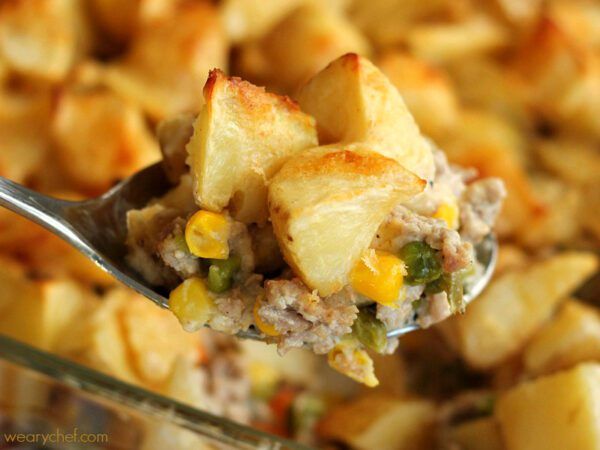 This isn’t what I would call a quick weeknight dinner. It uses two skillets plus a baking dish and takes over an hour to make including baking time. It’s great for a Sunday dinner or for making ahead if you are home to cook during the day. I have the one pictured here in the refrigerator for tonight’s dinner, and I can’t wait to dig in (again) later. I hope you love this recipe as much as we did! 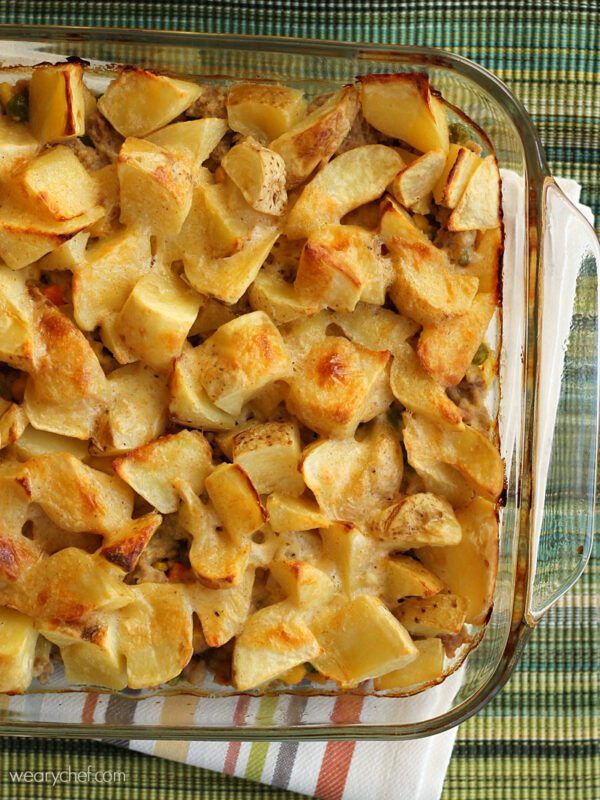 Print Recipe
Good-for-You Meat and Potatoes Casserole
This stick-to-your-ribs dinner is actually pretty light and good for you!

If you want to use fresh potatoes, just dice them, and soak them in water for about 5 minutes. Then, drain them and dry them on a kitchen towel. That step helps to wash some of the starch off the potatoes, and they will crisp up better in the oven.

You’ll also love these stick-to-your ribs casseroles that are good for you too! 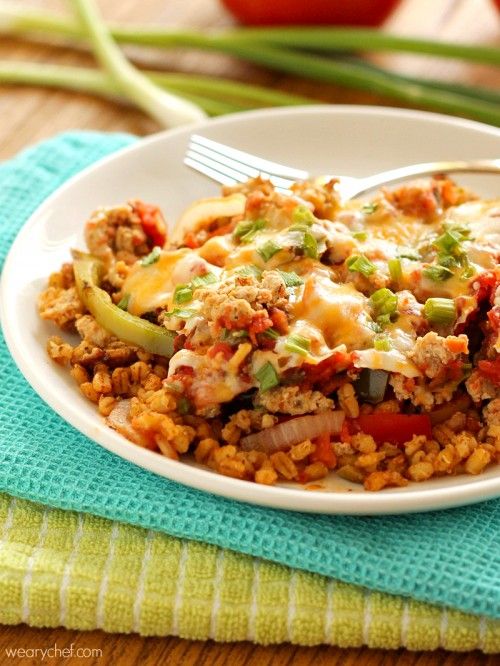 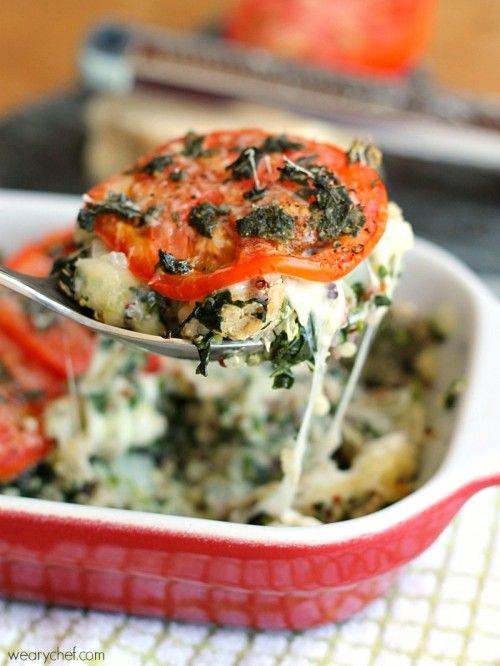 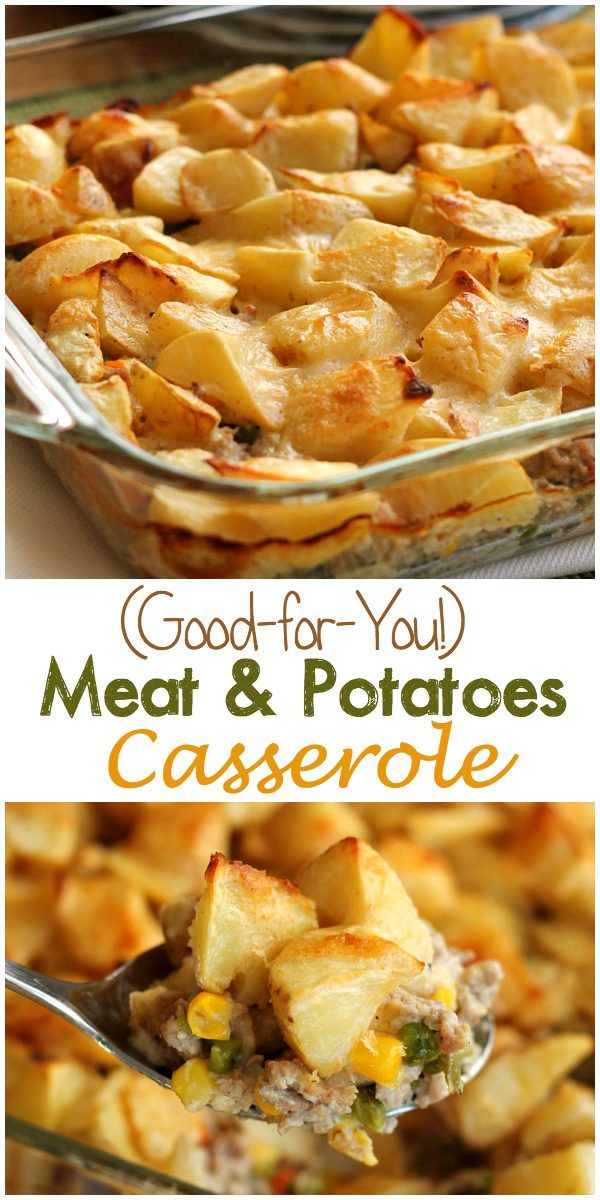 I’ve been using this recipe for about 4 years now and I just want to say it’s always a favorite! My grown kids beg me to make this for them! Then only difference of what I do is use tater tots instead of potatoes and I put them on top at the last before baking. My kids call it Tater Tot Casserole. Thank you so much for this recipe! No matter how much I make I never have leftovers. Love it! <3 <3 <3

I used Simply Potatoes, the 20oz bag and the casserole baked for 30 minutes. Also subbed cream cheese for sour cream. Was really good! Thanks!

Just wanted to comment on your shepherd’s pie observation…I certainly agree. So, try mashing the potatoes with sour cream and cheese (no milk or butter). With the meat, substitute onions, bell pepper, and zucchini instead of the corn and stuff. Add in some sherry, worchestershire, and liquid smoke. Bake until the potatoes get some browning on them.

Can you recommend a substitute for sour cream (I hate sour cream.). Can I just leave it out? Is there a liquid I should increase if I do?

I made this tonight with the help of my 11 year old granddaughter. So easy but yet so good. She being a very picky eater went back for seconds because it was so good but she was too full to eat it! The only change I made was I used just corn ( did I mention picky!) And used garlic oregano potato wedges. Definitely a repeat for this household.

I found this recipe while looking for something to do with ground turkey other than meatballs, chili or tacos(which is what I usually do with it). Made this last night and it was so good! I made it thinking I’d have enough to get me through the rest of the week since I was the only one eating it. I did half potatoes and half sweet potatoes because I just wanted to . I love this and will more than likely be making it again! Thanks!!

I came across this recipe while looking for something healthy, but different to make with ground beef and potatoes. I used Havarti (because I had it on hand), all fresh veggies, and plain nonfat yogurt (sour cream replacement). It looks pretty much like yours and tastes pretty good. I’m sure I’ll try a variation of it again.

I love new recipes but I cant eat a lot of cheese.
If it is all cheese then exclude me from the list.