I don’t mean to toot my own horn, but this Sausage and Sweet Potato Chili may be the best recipe I’ve shared to date! 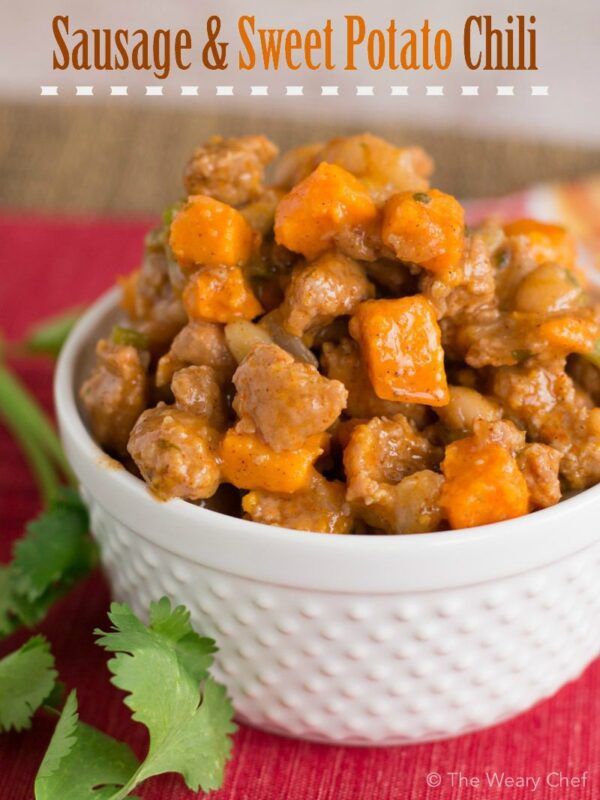 Guys, I feel like obligated to write a little story to go with this sweet potato chili, but all I really want to say is, “This recipe is SO GOOD! You have to make it!” I’m usually modest to a fault, but I’m pretty excited about this one. 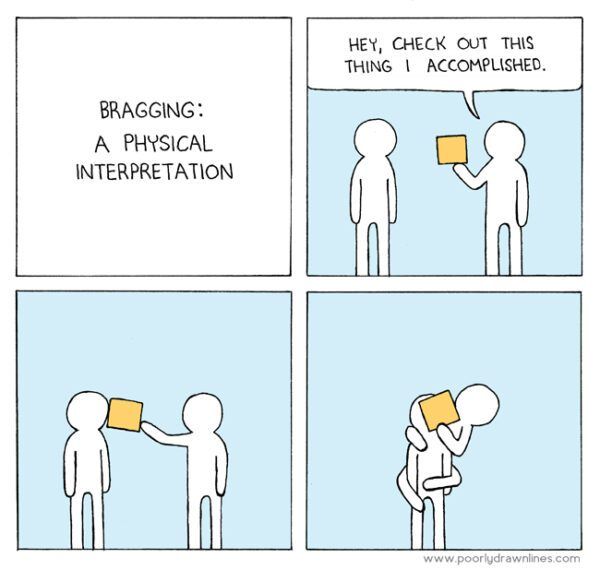 I don’t mean to brag, but I’m doing it. (Source: poorlydrawnlines.com)

I had an interesting experience on Sunday. I took my boys to the store for a pretty long list of groceries, and WE DIDN’T MAKE A SCENE. Not only did my children act like civilized human beings, my oldest actually helped. A lot. I sent him to the deli to get the roast beef all on his own, and he got in line and started unloading groceries while I grabbed one last thing. It was amazing. I’m usually telling them to stop running around like animals at the grocery store, so I was beyond proud of their behavior. 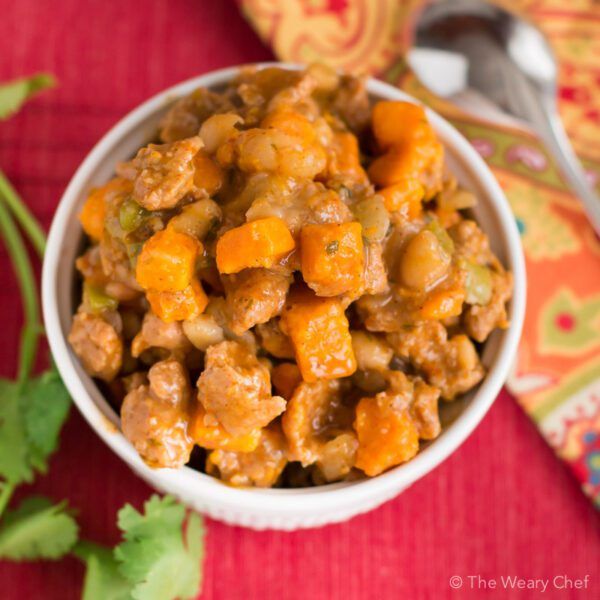 One thing my son was helping with was gathering produce. The funny thing was, when I sent him for a sweet potato, he came back saying they just had a bunch of different yams. I realized that I still don’t really know the difference between a yam and sweet potato. I went over to look at the options with him, and we picked the orangiest looking yam and decided that would work fine (which it did). In case I’m not the only one who doesn’t know a yam from a sweet potato, I did a little research that I will share with you before getting to this right tasty sausage and sweet potato chili recipe. 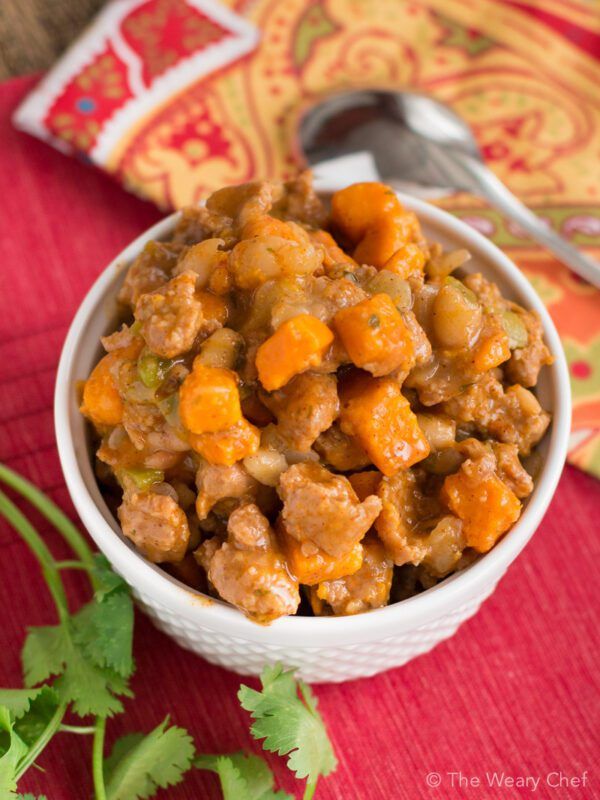 To make it even more confusing, in America, some sweet potatoes are called yams, so basically there is no difference since you don’t even necessarily know what you’re getting! When you go shopping for this recipe, just get a yam or sweet potato. Either one is fine. Now’s let’s get to this tasty recipe: 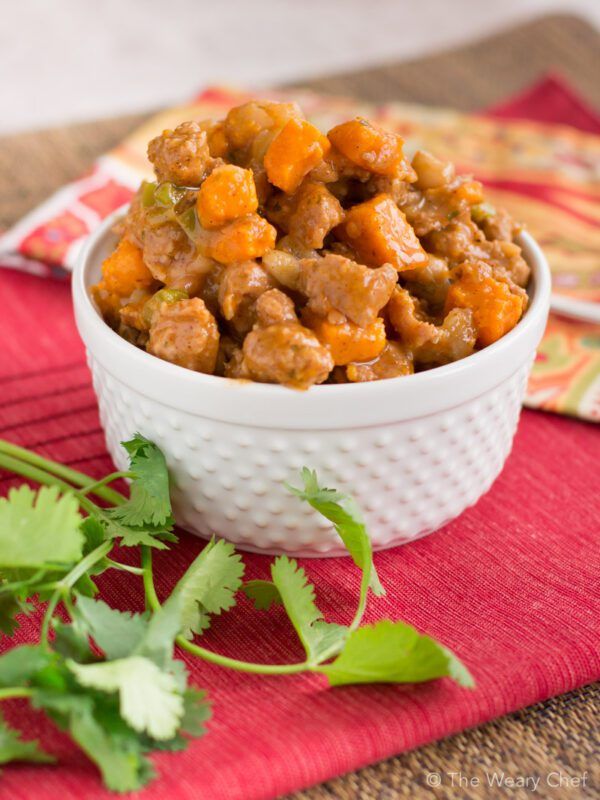 Print Recipe
Sausage and Sweet Potato Chili
This hearty chili is a little sweet, a little spicy, and a real crowd pleaser!

Here are a couple other recipes you don’t want to miss! 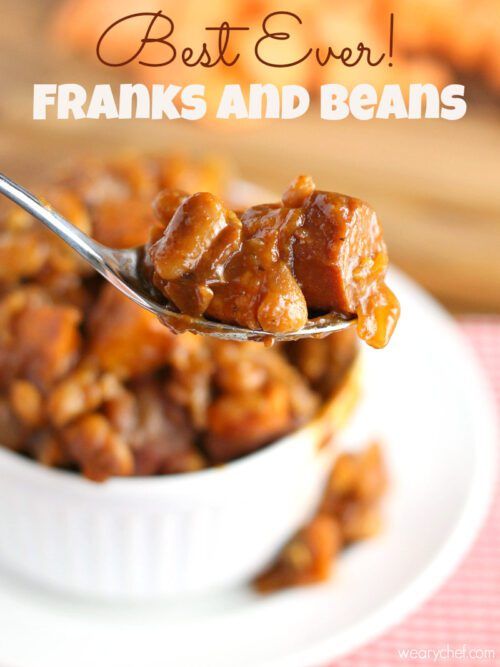 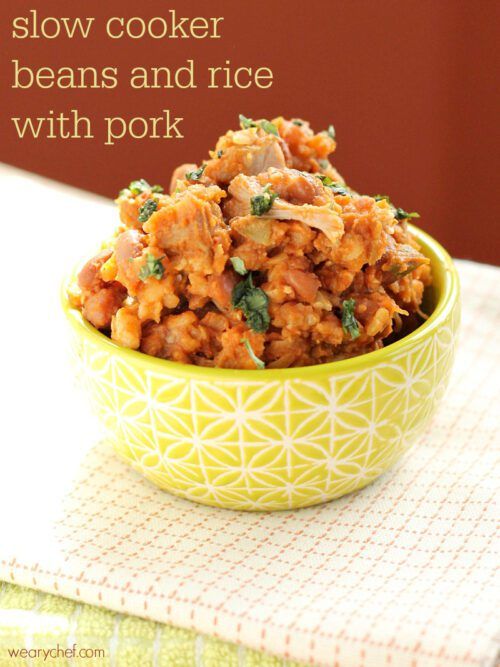 I’m an all year round kind of chili girl. Love the addition of sweet potato….yum!

I am going to try this recipe soon–it looks AMAZING!

I love how hearty this dinner looks! Glad you had a good grocery shopping experience. Those are few and far between in my world..

I bet, Jaren! You have more kids to embarrass you than I do ;) Thank you so much!

I never got the whole sweet potato vs. yam thing! But I don’t really care because I know either one would be delicious in this yummy chili! Looks amazing!

This certainly looks like a recipe to brag about! I love sweet potatoes but haven’t ever tried them in soup.

I love it – “we didn’t make a scene”. HA! I feel like we can’t go anywhere without making a scene, so bravo to you! And this chili looks amazing, too!

I remember the moment well when I took my kids to the grocery and they actually helped and didn’t run around asking for every sweet treat they could find. It was the best day ever! This chili looks so delicious. I love sweet potatoes and this is such a unique way to enjoy them.

Haha, it is always nice when the kids behave! I really like this spin on chili. I have never used sweet potato in my chili before, but I must give it a try!

Thank you, Kacey! This chili is a little sweet and a little spicy. I think you would really like it!