When you are in the mood for some creamy and cheesy macaroni baked at home in no time, try this Chick-fil-A Mac and Cheese recipe. The fast-food chain’s macaroni recipe is famous for its incredible creaminess and flavors. So, today we will learn how to replicate that recipe and do everything from our kitchen with simple ingredients.

This will be a cheesy afternoon, loves, and I’m not talking about the movie I just finished! It’s all about the fantastic and incredibly tasty mac and cheese recipe Chick-fil-A gave us all these years. Now, it’s finally time to try to make our own, of course, following their ingredient list.

Chick-fil-A is one of the largest American fast food restaurant chains and the largest specializing in chicken sandwiches. Many of the company’s values are influenced by the Christian religious beliefs of its late founder, S. Truett Cathy (1921–2014), a devout Southern Baptist. That’s why all Chick-fil-A restaurants are closed for business on Sundays, as well as on Thanksgiving and Christmas Day. I find it really nice how a fast-food chain stands for its beliefs even when they cause controversial situations.

“We should be about more than just selling chicken. We should be a part of our customers’ lives and the communities in which we serve.”

Before we start preparing this creamy macaroni dish, I think it’s important to get familiar with the copycat Chick-fil-A recipe and its basics. So here are the three most frequently asked questions about the recipe. Make sure you read them before cooking the mac and cheese, as these are great pieces of information.

What Is Chick-fil-A Mac and Cheese?

The Chick-Fil-A Mac & Cheese is “a classic macaroni and cheese recipe featuring a special blend of cheeses including Parmesan, Cheddar, and Romano. Baked in-restaurant to form a crispy top layer of baked cheese.”

Does Chick-fil-A Use Real Cheese in Their Mac and Cheese?

Yes! Where is the benefit of the doubt, loves? Of course, the recipe contains real cheese! As previously said, a blend of types of cheese is used to prepare the creamy and cheesy recipe. You can always just visit Chick-fil-A’s website and read the ingredient list for yourself.

Are Chick-fil-A Mac and Cheese Frozen?

The noodles are prepackaged and frozen with a mix of cheddar, parmesan, and romano cheeses. That’s understandable, considering we are still talking about a fast-food dish. However, after thawing, they are baked in the oven for some minutes and then topped with Monterey cheese, giving the dish a cheesy crust.

How Can I Store the Homemade Mac & Cheese?

If you have any leftovers, you can put them in a freezer-safe storage container and freeze them for up to three months. However, take into consideration that, most likely, this dish won’t have the same taste defrosted as fresh from the oven.

On the other hand, you can always just store the mac and cheese in the fridge for up to 5 days. I strongly advise you to go for the second way of storing it. Not to mention that if you adjust the ingredients’ quantities, you can prepare the exact amount of mac and cheese you need for one meal.

How to Make Chick-fil-A Mac and Cheese

The moment of truth, my loves! Let’s learn how to prepare this cheesy macaroni dish with easy-to-follow instructions and affordable ingredients. You don’t have to worry! Just follow the recipe and ingredient list.

What You Need to Make Chick-fil-A Mac and Cheese

What you need to prepare the macaroni:

What you need to prepare the cheesy sauce: 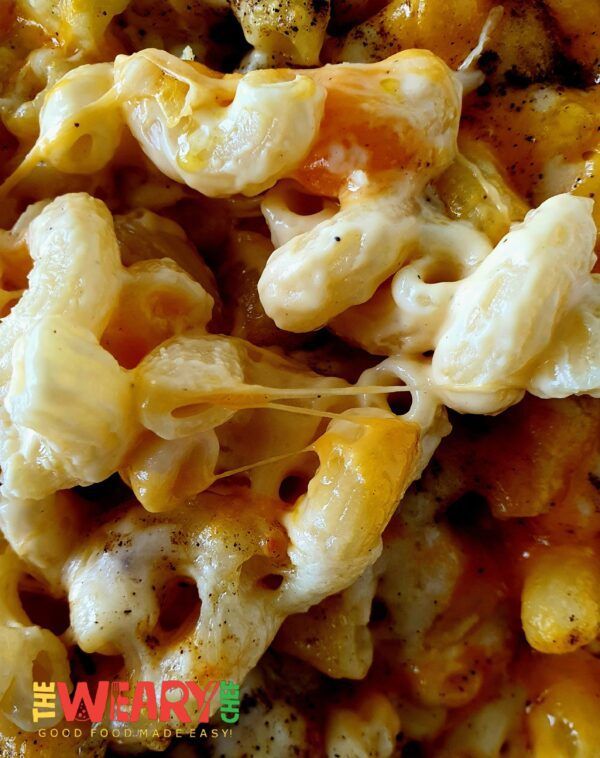 Have a Cheesy Afternoon!

Finally, it’s your time to share your experience with this recipe and all your thoughts on it. So, tell me everything in the comments section: What do you think about the copycat Chick-fil-A mac and cheese recipe? Did you experience any problems when making the cheese sauce? Did your loved ones enjoy this creamy dish? Additionally, did you go for the main recipe, or did you improvise? If you went extra, let us all know how that went!

Also, do not hesitate to ask any further questions about the copycat Chick-fil-A Mac and Cheese recipe in the comments. I will make sure to answer as soon as possible. Last but not least, if you are eager to find out more easy copycats recipes that are sure to impress, I got you!