You are here: Home / Export / How to Make Restaurant-Style Alfredo Sauce with Pasta at Home

Looking for that smooth, rich flavor of killer restaurant-style alfredo sauce at home? Perhaps you’re wondering where it came from, too, but getting it without having to leave your house would be even better. How about, we cover a little of both? 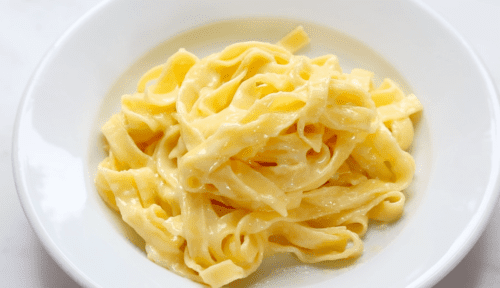 Alfredo sauce has a storied past. If you didn’t know any better, you might think it was a famous Italian recipe, prepared for emperors and popes by some famous Renaissance chef named Alfredo. Or maybe it hails from the Alfredo region, like a nice Bolognese. In reality, the sauce itself is inherently Italian in nature, and it was named after someone — but it was Americans who made it a household name.

“Alfredo sauce,” as we know it, doesn’t exist in Italy. Alfredo is what you call your Uncle Alfred. There is an “al burro” style of cooking that means “with butter” and often incorporates grated Parmigiano. The origins of “Alfredo” itself are from a Roman restauranteur named Alfredo Di Lelio, who was popular with North American tourists. As legend tells it, Hollywood stars brought the dish to their friends, and a star of Italian-American cuisine erupted in a shower of cheesy glory.

That little Roman restaurant is still open, under new ownership, and it still serves the same original recipe. Has it stood the test of time here in America or has the recipe changed? We don’t have the original recipe to compare, but we can tell you — our recipe for restaurant-style Alfredo will knock your socks off and impress anyone.

Alfredo isn’t something you want to get wrong. Undercook it and it’s runny and gritty. Overcook it and it turns to foam. The first thing to do is to remove the word “sauce” from your thinking. The biggest mistake people make with Alfredo is they make it in a pot, as a sauce to pour over pasta. That creates issues, as good Alfredo is always thick and rich enough to coat the noodles. In a pot, you’ll end up either adding too much cheese to get the right consistency or an emulsifier like corn starch or flour.

None of those options are acceptable if you want to serve an authentic Alfredo sauce. The starch doesn’t have to come from corn or flour; it comes from the pre-cooked noodles. Fettuccini and linguini are the favorites, but any pasta will do. The secret is, after cooking your pasta perfectly al dente, set it aside in a stainless steel bowl — without rinsing. When you rinse your pasta after cooking, you’re rinsing away much of the starch, which is the secret emulsifier in true restaurant-style Alfredo.

Now that your pasta is cooked and ready, you’re ready to become the chef of your very own Italian kitchen.

Let’s go ahead and get one thing out of the way. Restaurant-style Alfredo is not a “healthy meal.” There are no corners to cut to make it better for you. If you’re looking for an Alfredo sauce that conforms to a particular diet, you should consult a nutritionist. The ingredients in this dish are as pure and wonderful as the dish itself, and there are no substitutes.

What You Need to Make Alfredo Pasta at Home:

These ingredients are for a single serving. When you order Alfredo in an authentic restaurant, they don’t pour sauce over pasta, either. It is a to-order recipe:

First and foremost, this recipe is for a single serving with nothing but sauce and pasta. If you’re serving more people or want to add a protein like grilled chicken or shrimp, it’s wise to have those ingredients ready and resting when you fire up the burner.

If you don’t own a 10-inch nonstick skillet, buy one. It is, by far, the most versatile pan in the kitchen. Stainless and cast-iron work well if those are your preference, but nothing can compete with quality, nonstick pan for most restaurant-style dishes.

Turn the heat on high and add the butter to the pan. Once it melts nearly all the way, add the heavy cream, then the egg yolks. Combine those ingredients with a whisk. As soon as the cream mixture begins to boil in the pan, add the cheese. Stir together for about 90 seconds and have a taste. Is it cheesy enough? Too cheesy? Does it need salt and pepper? You’ve now reached the point that the dish is complete and the time has come to make it your own. If it needs cheese, add it by the pinch. If it’s too cheesy, add a bit more cream.

Now it’s time to drop the pasta. Take a serving of pasta and add it to the sauce. Rather than stirring, pull the pasta straight up and out of the pan with tongs and gently lower it down. With each pull, you will watch the sauce thicken as the starch from the pasta saturates it. Remove the pan from heat and keep pulling a few more times.

If you’re going to make something this delicious, it has to look good. This recipe isn’t for some skimpy portion of pasta. This is a huge pile of pleasure suitable for any table. You’ll need large plates or pasta bowls. If you’re using traditional long pasta, try to lay the noodles in a bit of a spiral. Toss a bit of fresh chopped parsley on top and a pinch of grated cheese for that finishing touch, but be careful not to overdo it. Alfredo is a balanced dish that will turn on you quickly if you overdo the cheese or overwhelm it with spices.

Here are the Don’ts when Cook Alfredo Pasta

Don’t get too fancy. This dish is more about paying attention for 10 minutes at the stove than anything else. Make sure you have what you need handy. Any cheesy sauce runs a high risk of burning, and this sauce cooks over high heat. Adding ingredients and trying new things can be fun, just don’t be surprised if it doesn’t work out.

There are certain things that sound like they belong in an Alfredo sauce that can actually cause more harm than good when you’re making a restaurant-style Alfredo. Mushrooms, for example, taste great in Alfredo. If you don’t pre-cook them, however, they will overpower the sauce when they render down and expel their natural juices. Your alfredo will taste more like mushrooms than alfredo. Pre-cook the mushrooms and add them at the end.

Cooking Alfredo with chicken in it won’t change the flavor of the sauce much, whereas using seafood — like shrimp or scallops — will. As such, it’s best to treat all proteins the same and cook them separately. Alfredo is the star of this show.

Serve the Alfredo Pasta with Nice Bottle of White

Like all Italian — or at least Italian-inspired — dishes, Alfredo serves well with salads, almost any kind of bread, and a sweet Chardonnay. This recipe will provide you with a mountain of food you’ll likely not be able to finish. If done properly, however, a good restaurant-style Alfredo will come back to life the next day will a little bit of milk and that same nonstick skillet.

Now that you’ve seen how we do it, do you have your own way? Trade recipes with us in the comments!