Portabello mushrooms and chicken Marsala go hand in hand. Those dark brown, overgrown caps — sliced just right and sauteed like a steak — draped over the perfect Marsala-soaked chicken are exactly what the doctor ordered for a healthy, watering mouth. The perfect mix of flavors for an age-old Italian feast. (Don’t worry, it will work with regular button mushrooms, too, as pictured here.) 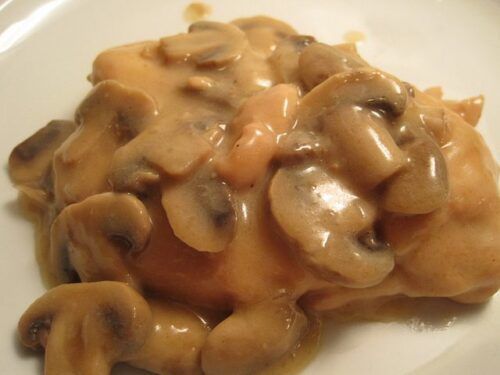 You’ll be surprised to learn that restaurant-quality portobello chicken Marsala is less than 30 minutes away. Once you have the prep done and the pan pre-heated, you can expect to serve piping hot, made-from-scratch chicken Marsala with seared, sliced mushroom caps to die for — in 12 minutes or less.

The time has come to up your game. Whether you choose to go all-in and flambe your sauce or simmer it down traditionally, you’re going to have an end result you won’t soon forget — and a new favorite dish to make at home.

Not all chicken breasts are alike. Your boneless, skinless breast should have two important qualities to work in this recipe: it should be clean — meaning tender and all fat and rib meat removed — and thick enough to filet into two equal portions. The quality of the breast itself is up to you. For the best portobello chicken Marsala, use free-range, organic chicken from a local source. Stay away from chicken that has been “enhanced,” which is a fancy word for “injected” with broth you’re now paying for by the pound.

Some of the bigger stores offer super deals on enhanced breasts that contain as much as 15 percent chicken broth. That broth comes right out when you cook the chicken, adding it directly to your sauce. While we do use chicken stock in our recipe, it is not the same thing. Avoid enhanced or injected chicken for this type of meal.

Ah, those Italians. They have all the best names, don’t they? Marsala is a sweet, light red wine that hails from — you guessed it — the Marsala region of Italy. Its grapes grow year after year, lauded by chefs across the globe a the birthplace of one of the greatest sauces in humanity’s arsenal of delicious things. The Marsala wine you choose should be authentically labeled “Marsala.” You will find it in most supermarkets with the Port and cream Sherry, often pre-salted and sold exclusively for cooking.

If you must go to a beer and wine store due to your state laws, be sure to be frugal. Expensive Marsala isn’t what you’re after. You want the alcohol to cook off quickly. It doesn’t need age or a special name. It needs to be a moderate price point and a recent year. The sweetness of the grapes is far more important than becoming a connoisseur of fine wines.

Portobello mushrooms look and sound awfully fancy, don’t they? Their story, unfortunately, isn’t as pleasant as their flavor. A portobello mushroom is nothing but a standard domestic mushroom, otherwise known as the brown crimini. It was the standard in cuisine until the 1920s, when an American farmer developed a white version of the domestic variety, now simply dubbed the “white mushroom,” and the brown-skinned crimini as lost to history.

In the mid-1990s, large-capped versions of the good old crimini brown mushroom started to appear in stores like Whole Foods and Trader Joe’s. Before long, what was once a fungus tossed asunder for not being attractive enough received a complete rebrand, emerging as a more expensive and better version of the — now far too simple — white mushroom. How the portobello mushroom got its name is a mystery; what’s not are the multiple spellings. Some spell it portobella, portabella, or portabello. As far as we can tell, all of those spellings are acceptable. Smaller versions that look like white mushrooms in all but color go by “baby bella.”

Everything else you need for portobello chicken Marsala

On top of those three main ingredients, you’ll also need a small list of essentials to make the best portobello chicken Marsala. We don’t recommend substitutions:

The flour is for dredging the chicken and should include black pepper to taste. Mix in a small bowl and set those aside. In a liquid measuring cup, add 2/3rds of a cup of canola oil to 1/3rd of a cup of light olive oil. Make sure all of the components are ready to go before you worry about lighting burners, heating pans, or cooking proteins.

Preparation is the name of this Italian game

Now that you have everything you need, it’s time to prep for your meal. The 30-minute clock gives you up to 18 minutes to gather your supplies and prepare the chicken and mushrooms for cooking. So far you should be sitting with at least 10 to 12 minutes of prep time left and a simple task or two ahead before go-time.

Your chicken should already be clean, void of fat and the tenderloin, leaving you a misshapen teardrop of lean white meat: 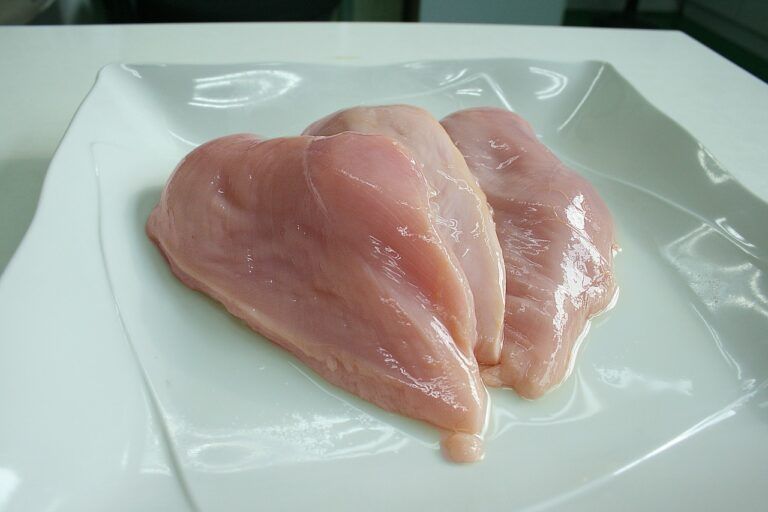 CC0 by Kakyusei via Pixabay

Each teardrop now gets fileted into two. A filet is a long slice through the meat, leaving two long, wide, steak-like pieces. When you filet your breasts into two, be very careful. It isn’t the same as a cross-cut through the breast. You’ll need a fairly long and very sharp knife, preferably a filet knife, for the task. The video gives a pretty good idea of what the average home chef’s breast should look like after this stage of the prep:

Now that your chicken is ready to go, it’s time to slice those portobello mushroom caps. If you’re unfamiliar with them as an ingredient, portobello caps are a bit intimidating. It’s already quite the feat to make typical mushrooms exciting enough to star on a dish this delicious. Is the portobello really up to the challenge? The first thing you have to do is get them ready for slicing. Cleaning a portobello in easier than it looks:

Now that you have nice, clean portabellos, it’s time to slice them for the pan. Lay the cap flat with the top down and cut it into one-inch strips. The ends won’t be as long, so leave them a little wider.

The chicken is in nice, thin filets; the mushrooms in perfect slices. The other ingredients sit mixed, blended and awaiting their mission. The time is now to fire up a couple of burners to get your pans nice and hot.

Choose the right cookware and save yourself some time

The right type of pan and utensils will make all the difference when you create the best portobello chicken marsala from scratch. The recipe is basic; the finesse involved is not. Luckily, in today’s home-chef society, the right set of pans can replace finesse. In this case, you need two 10-inch nonstick skillets, or frying pans, one for the chicken Marsala and one for the mushrooms, which cook separately to avoid overwhelming the sauce.

Get the cooking party started

This portion of the recipe is critical because this is where things get burned if they go wrong. The mushroom pan needs little more than a teaspoon of oil. The chicken pan should have enough oil to coat the bottom and be deep enough to cover at least half the height of a chicken breast. Turn that one on high heat and get it nice and hot.

Once you’re through that, dredge your chicken in the peppered flour and drop the pieces in the oil. Let them sear fully on that side before flipping them with tongs and letting the other side sear as well. This entire process should take no longer than four to five minutes, and you’ll have lightly-breaded chicken cooked to order waiting to join a world-class sauce. Remove them and set them aside.

About halfway through cooking that chicken you’ll want to turn the other burner on and get the mushroom pan hot. Scatter some rock salt on the bottom of the pan. Lay the slices in the pan, making sure to get some oil on each, and season with cracked black pepper. Cook the mushrooms like you would a piece of steak, searing one side fully before flipping — and only flipping once. after 3-4 minutes per side, they should be shrunken and moist, with a nicely seared skin. remove the pan from heat and set the mushrooms aside.

Now for the sauce

Empty the oil from the chicken pan and set it back on high heat. Ad the marsala wine, deglaze the pan and burn off the alcohol:

If you don’t feel comfortable with the open flame from this step, you can skip it and simmer the alcohol out instead by adding about 10 minutes to your cooking time.

Now that your pan is deglazed and your wine is rendering down it’s time to add the garlic, salt and pepper to taste, and the chicken stock. When it returns to a boil, add 2 tablespoons of butter. Once melted into the sauce, the time has come to join your ingredients. Drop the chicken breasts back in to simmer for the last 4 or 5 minutes, moving the chicken around with tongs and flipping it at least once. Once the sauce starts to thicken, lay the mushrooms in to soak up some sauce and add some flavor. Continue reducing the sauce to your desired thickness and remove from heat.

Portobello chicken Marsala is a versatile meal you can serve with bread of nearly any kind and a host of other sides and vegetables. Some like it served over or with a small portion of pasta. Some prefer it as a standalone meal with a side salad. The meal itself offers very little in the way of color, so a vibrant veggie can be the key to a plate that looks spectacular. Marsala reduction, while a form of red wine sauce, serves best with a white.

Is it worth it?

Portobello chicken Marsala may not be the easiest thing to make, but it’s definitely worth the effort. That sweet and savory sauce isn’t just fun to create once you get the hang of it, it’s bound to be on your list of favorite restaurant-style meals to make at home.

Do you have a Marsala sauce of your own? Trade recipes with us in the comments!