These skillet Hawaiian BBQ Pork Chops with Pineapple are a delicious dinner you’ll want to remember for busy nights!

I have to confess that I don’t make pork chops that often. Usually, I’ll make pork roast in the slow cooker, and then we’ll have pulled pork sandwiches, carnitas, or even pork roast soup for leftovers. But those definitely fall and winter recipes, and since it’s still warm out, I wanted to pan-fry the pork chops on the stove instead and add some magic pineapple to spice things up.

I should also confess that my kids are not that crazy about pork chops. Seriously, what’s wrong with them, right?! Anyway, whenever I make something that my kids aren’t crazy about, I usually add barbecue sauce. It’s one of my secret weapons because those kiddos will eat just about anything if it has BBQ sauce. And if it has pineapple, even better!

This is a super simple, quick, and easy Hawaiian recipe, and it comes together in less than 20 minutes. All you do is make the sauce, brown the chops, add the sauce to the pan, and let the chops simmer until done. I like to remove the pork from the pan and let the sauce boil and thicken before adding the meat back in, but I’ve also made it by just adding the sauce directly over the pork. It’s really fine either way. Just do what you find easier.

Now personally, I like to cook the pork chops in a cast-iron skillet. It does an awesome job of browning the meat, and it holds heat well so the chops stay nice and warm. But any heavy skillet will work here. If you need an iron skillet, you can find one here on Amazon.

I’m happy to say that my family loved these Hawaiian pineapple pork chops. I served them over couscous, but you can use rice, quinoa, or even mashed potatoes. Enjoy!

HOW TO MAKE HAWAIIAN PORK CHOPS WITH PINEAPPLE 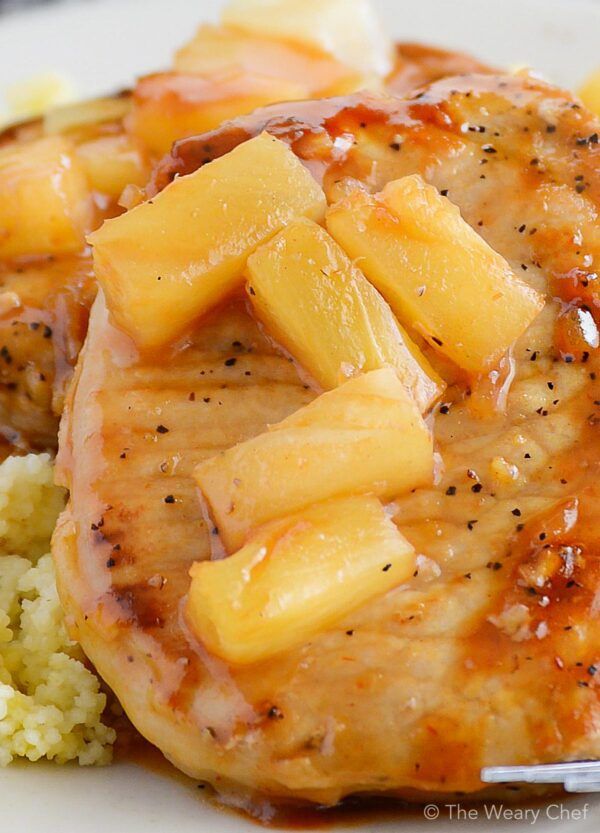 Votes: 18
Rating: 3.67
You:
Rate this recipe!
Ingredients
For the pork chops
For the sauce
Instructions