I’m so excited to bring you this recipe as a 2016 Reynolds Ambassador! You won’t believe how easy and delicious these Slow Cooker Cocktail Sausages are. They only need three ingredients and require very little prep or cleanup!

You guys. YOU GUYS!! I am super excited to show you this recipe for the ultimate cocktail sausages. This total no-brainer recipe has you covered for holiday parties, potlucks, and football watching. Heck, you could even toss in some bell peppers and broccoli and serve these sausages over rice for dinner!

This recipe is a new take on two classic recipes: Grape Jelly Meatballs and Little Smokies. My mom has been telling me to try jelly meatballs forever, and I just haven’t brought myself to do it. I know everyone says they are wonderful, but in my mind, grape jelly is for PB&J, not meat. You probably know that Little Smokies are mini sausages or wieners (snicker, snicker) slow cooked in BBQ sauce. I thought long and hard about how I could put my own spin on those ideas, and I came up with these sweet and spicy chicken apple sausage bites. 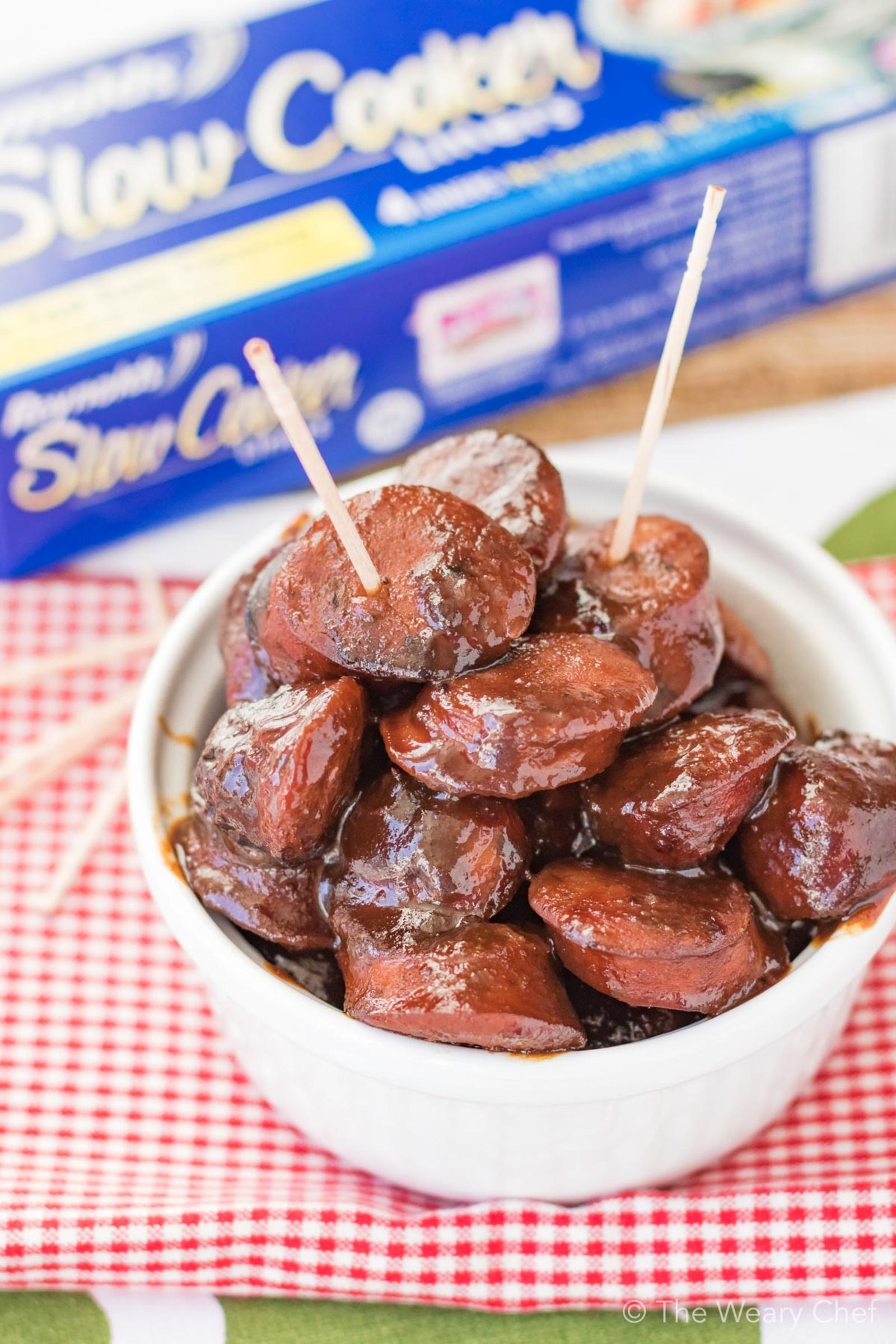 These babies are going to make you a superstar at any party, and they only need three ingredients and almost zero effort. All you need is sausage, apple butter, hoisin sauce, a slow cooker, and Reynolds Slow Cooker Liners to make cleanup a snap! These bags are actually made of a nylon-resin, not plastic, and they are heat resistant to stand up to a day of slow cooking without letting any ingredients escape.

You might say that the hardest part of this recipe is opening the slow cooker bag. The edges can stick together like those produce bags in the grocery store. Am I the only one who can stand there for minutes trying to get one of those bags to open up? The plastic is so hard to separate!! Well, you’re in luck because I’m going to pass on a tip that a nice, elderly lady told me once: Get your fingers a little wet, and then you’ll be able to open it like magic. She showed me to touch the produce that was wet from the misters and then rub the bag edges to separate them. That’s what I have done ever since. She was a GENIUS. (This tip works for the slow cooker liners too.)

Truth be told, I don’t always get produce bags because I try to avoid using more plastic than I need to, but when I’m getting a dozen limes or wet parsley or something like that, a bag is definitely in order. The same goes for slow cooker liners. I don’t usually use them for recipes with a thin broth that will be a cinch to clean up, but they are a lifesaver for recipes you know will bake onto your crockpot. If you are cooking a dessert, cream sauce, BBQ sauce, or anything along those lines, Reynolds slow cooker liners are a must! 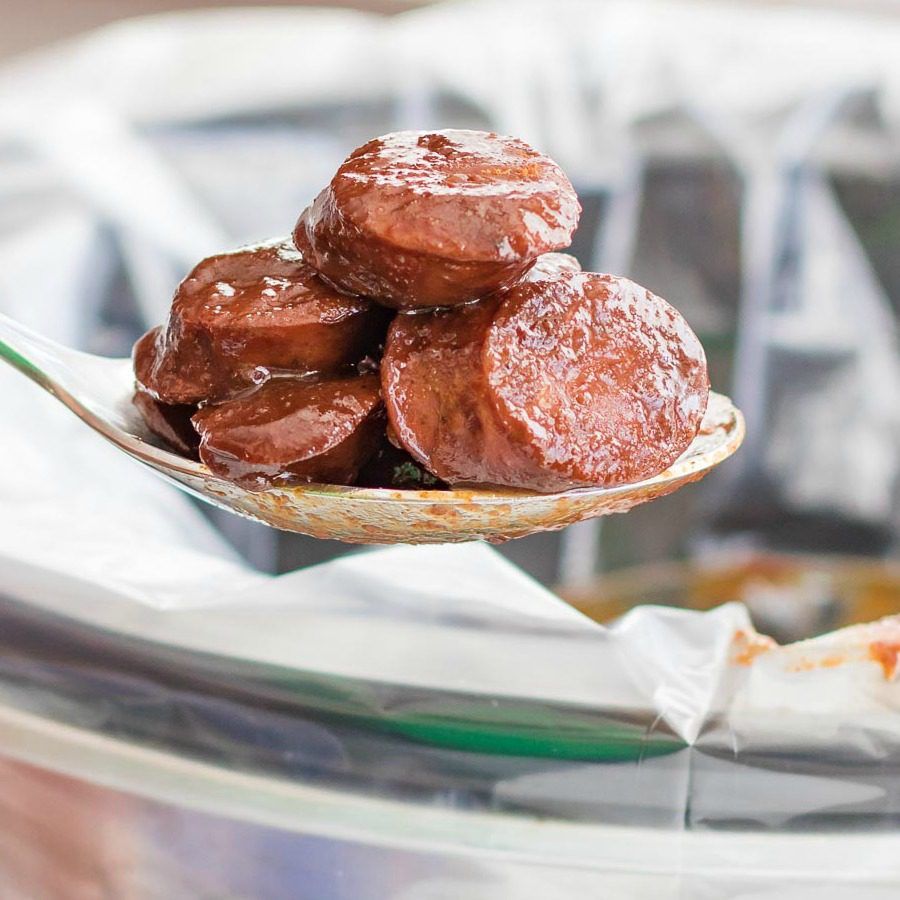 You are going to be so happy to have this recipe the next time you need to entertain. Since these cocktail sausages are made in the slow cooker, they don’t need oven space or a watchful eye on the stove. You can spend five minutes getting them ready a few hours before the party starts, and then you don’t even have to think about them while you do the rest of your prep! Plus, with the slow cooker liner, you’ll have zero cleanup to worry about. Be sure to pin this recipe to remember it, and check out the Reynolds site for lots more great slow cooker recipes!

Thanks again to Reynolds for sponsoring this easy slow cooker recipe. 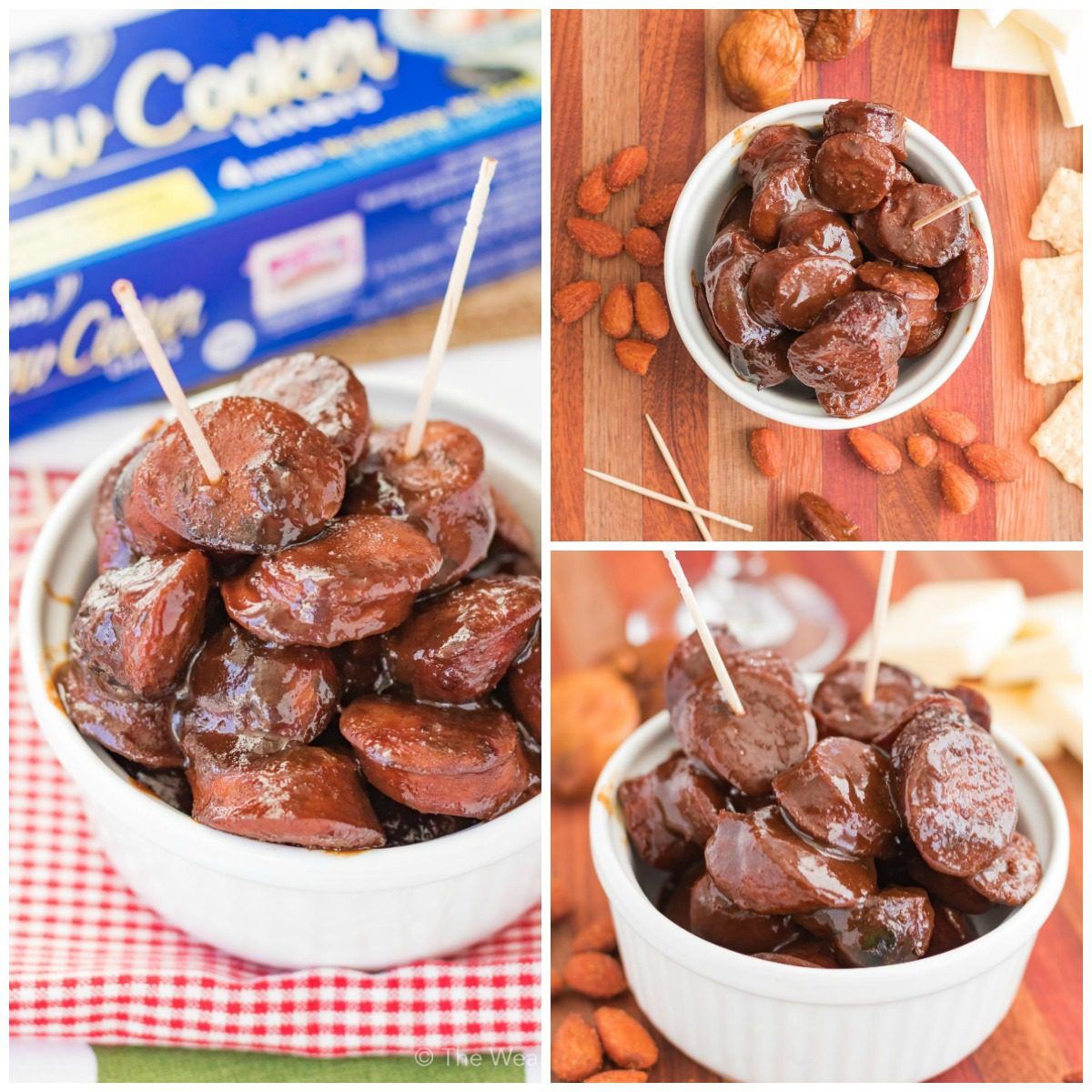 I have been making something like this since the 1970’s. A recipe used regular weiners, red currant jelly & regular mustard. It eventually branched out to be a favorite at Thsnksgiving & Christmas.

I have to make these over the Holidays!

What a great idea! So easy. They look really juicy and tasty.

These would be perfect for our game day dinners! Love the tip about the grocery bags — I can never open them!

I am always looking for easy and delicious recipes like this!

WOW!! These are perfect for game day!! They look so delicious!

Thanks so much, Katerina!!