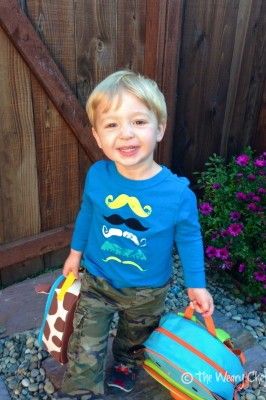 This was a big week: The Short One started preschool! I didn’t know how that would go since he is just barely two, and I have never really left him with anyone except The Pants. He tries to sneak into The Tall One’s first grade class on an almost daily basis though, so I suspected that he was ready for some sort of school of his own. Boy, was I right. He didn’t let out so much as a whimper when I said goodbye on his first day, and he was delighted to go back on the next school day.

It is strange to be away from him because he has been my almost constant companion for the past two years. I think it’s good for us both to have time away to miss each other though, and it is priceless to have him excitedly run to me when I pick him up. He is starting out with only two days each week at school, so we still have plenty of time to run around town together.

On to the food! This week’s easy dinner menu is a mix of favorites from menus past, some new Weary Chef creations, and one fabulous recipe from another blogger.

Don’t forget, you can easily build a free grocery list by clicking the “List” button in the right sidebar when viewing any of my recipes thanks to Feastie.

These are great! Can’t wait to try number 7. Thanks for sharing!
Katie~
Dysfunction Junction

Great ideas for cooking! And it looks so simple. Thanks a bunch for sharing this @ The Show Off Blog Party!

Thanks for stopping by, Jessica!

Another week of yum :-) Love how you keep those recipes coming. Hope today was a fun day for you and your family. And cute cute picture of your preschool student!

Thanks, Liz! It was a fun day! I was busy and didn’t take many pictures, but I’ll share what I have tomorrow or Monday.

Your post always make me soooo hungry even if I just ate! Thanks for sharing these recipes.

Thanks for joining our Show Off Your Blog Party. I’m one of the co-host.

Jules
A Dose of Jules

Thanks so much, Jules. I appreciate you having me at your party, and I’m impressed that you had over 100 people participate in your first week! Nice job!